During the experiments which take place under real-life conditions at Researchlab Automated Driving Delft, researchers collaborate on simple, safe, efficient, and automated transportation from A to B. We would like to introduce you to the team. 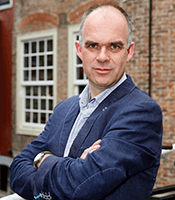 Bart van Arem is Head of the Transport and Planning department and Director of the TU Delft Transport Institute. In 2009, he was appointed to Full Professor of Transport Modelling at Delft University of Technology.

Arjan van Binsbergen is secretary of the TU Delft Transport Institute. Before this, he was previously active as the Business Director of the TRAIL Research School and a member of the management team for the BSIK programme “Transitie Duurzame Mobiliteit” (Transitions towards sustainable mobility). He is also a part-time member of the management team for JPI Urban Europe. Arjan studied traffic engineering and planning (MSc in 1992) and later worked as a researcher for several years at TU Delft, earning his PhD there in the field of goods transport in urban distribution (2001).

Areas of focus
Arjan works on connecting various scientific disciplines as well as establishing collaboration between businesses, governments, and knowledge institutes. He is particularly interested in sustainable mobility and goods transport, especially in urban areas. He believes that electric, automated public transport and goods transport can contribute to sustainable cities and increase the availability of transport for people who do not have or want access to a car. Automated vehicles can also help improve traffic safety, which in turn, improves the living environment of cities.

However, there are still a great deal of developments required for the reliable, large-scale application of automated driving. We have much to learn about the interaction between automated and non-automated driving and how automated driving can be functionally integrated into the complete transportation system. 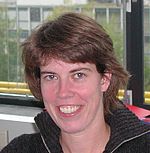 Winnie Daamen is an Associate Professor of traffic flow theory and the simulation of the flow of vehicles, pedestrians, and vessels in the Transport & Planning department at TU Delft.

Background
In 1998, Winnie began working on her thesis “Modeleren van passagiersstromen in openbare transferia” as well as the analysis of traffic systems. This specifically concerned the different types of pedestrian behaviour, such as walking, route selection, activity selection, and activity location selection in transport facilities.

In the years that followed, Winnie continued her research on pedestrians including modelling those studies. She applied new data collection techniques in the form of laboratory experiments on a variety of subjects (general walking behaviour, behaviour when boarding and disembarking, behaviour in and around revolving doors, the boarding of persons with disabilities, and the capacity of emergency doors) and optimised these techniques. Using the route data derived from these experiments, she was involved in the formulation of new theories and the further expansion of the pedestrian simulation program, Nomad, as well as the calibration of its parameters.

Over the last few years, Winnie has extended her range of expertise into traffic flow theory and the simulation of vehicle and vessel traffic. She researched empirical data on merging behaviours.

She is currently working on a theory for predicting merging behaviour when driving onto motorways via slip roads. Another area of research involved the development of a conceptual model for vehicles in narrow lanes. In collaboration with the department of Hydraulic Engineering, Winnie is involved in the data analysis, theory, and model development for examining and predicting the passing behaviour of individual vessels in harbours and waterways using simulation techniques equivalent to those applied to pedestrian traffic. 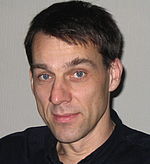 Riender Happee is an Associate Professor in the faculties of Mechanical Engineering & Civil Engineering at TU Delft. He is also a visiting professor at the Technical University of Munich.

Areas of focus
Riender coordinates automotive education and conducts research in the faculty of Mechanical Engineering, which is organised in collaboration with other faculties. He focuses on human factors for automated vehicles, safe and acceptable interaction with the “driver”, and other road users. From the perspective of his biomechanical expertise, he concentrates on motion perception and comfort. 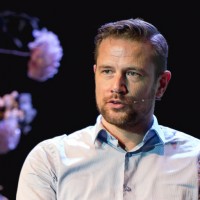 Alwin is an ambitious, results-oriented team player, who is constantly in search of new and exciting challenges. By creating a bond of trust, he tries to give people that little something “extra”.

He derives satisfaction from contemplating on the new role of the government and its short-term impact on daily activity. On top of that, he makes the impossible possible.

His goal is to create a diverse and engaging work environment with plenty of perspective and personal responsibility. This approach made it possible to get a project as complex and revolutionary as WEpod off the ground in 2016 and put it on the international map in such a short time span. since than continuing his work with his partner Joop Veenis at www.thefuturemobility.network.

Want to know more? Get in touch with us!